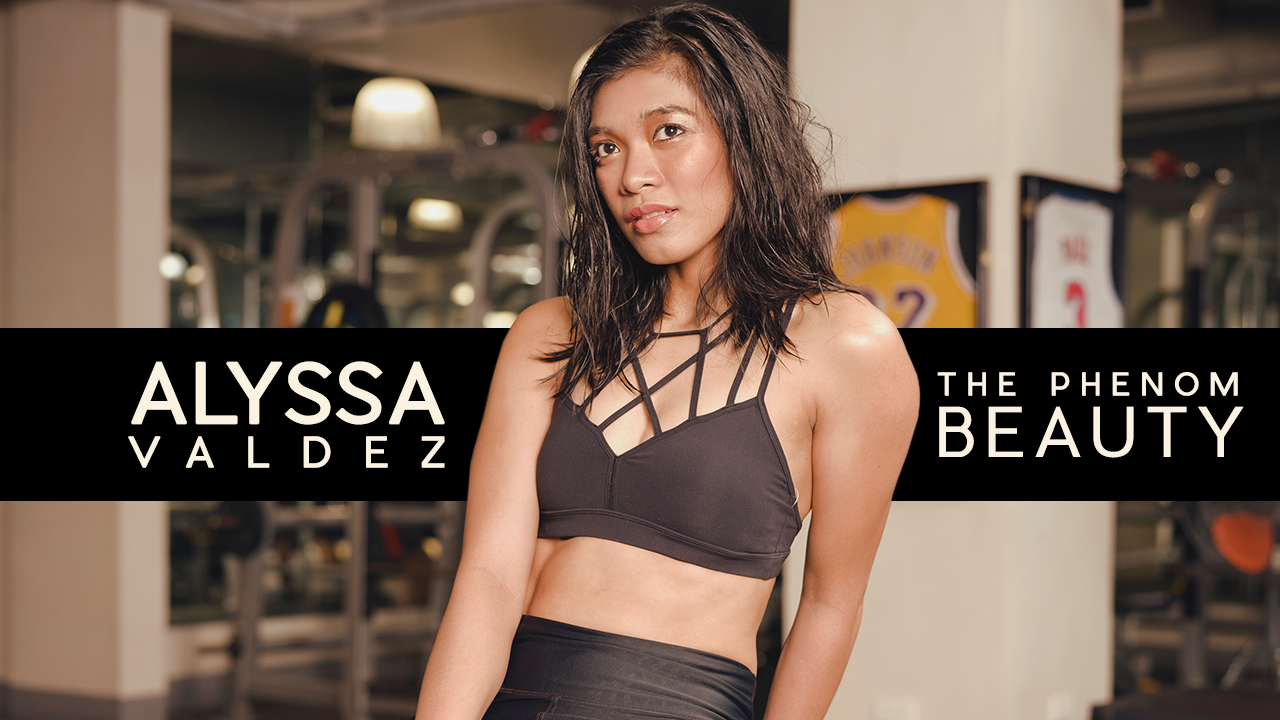 There’s something so magical about meeting a phenom beauty like Alyssa Valdez for the first time. It was an early Monday morning on the day of our cover girl shoot at The 3rd Fitness Lab in Quezon City. She arrived by herself in a cashmere top and denim shorts; a backpack slung against one arm, as she hunched her back and gave a shy smile, as if to apologize that she was late because the entire glam team was already waiting for her, when in fact, she was still a few minutes early from the call time given to her.

Coming from the same alma mater as the elite athlete, it was truly an honor for me to have met her—more so to have her as our April 2018 #CalyxtaGirl. Despite not being the biggest follower of volleyball, I watched games often and stayed updated with Alyssa even after she graduated in AB Psychology last 2015. 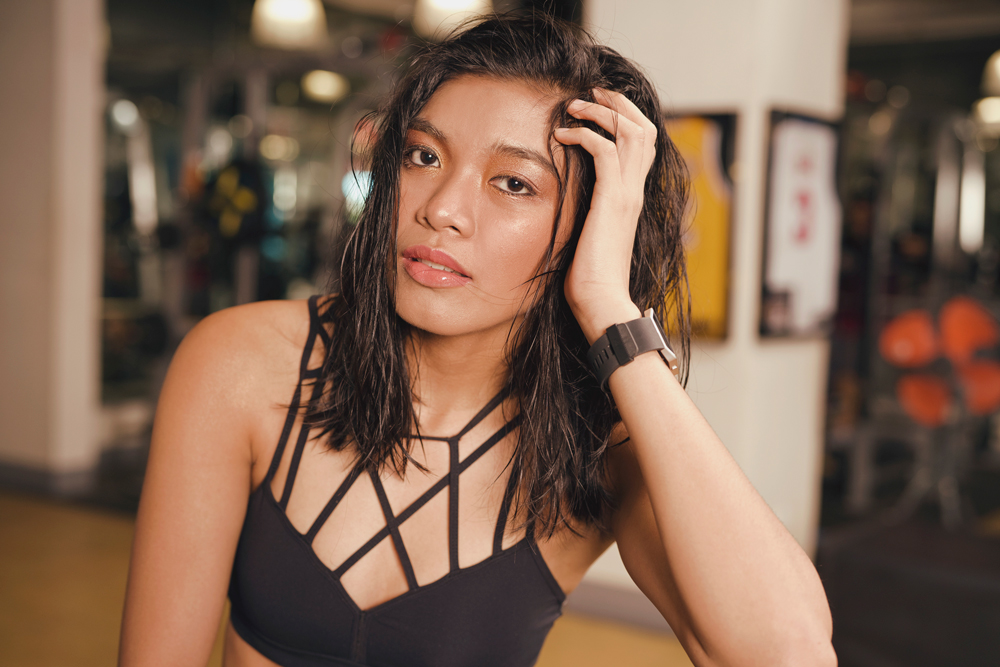 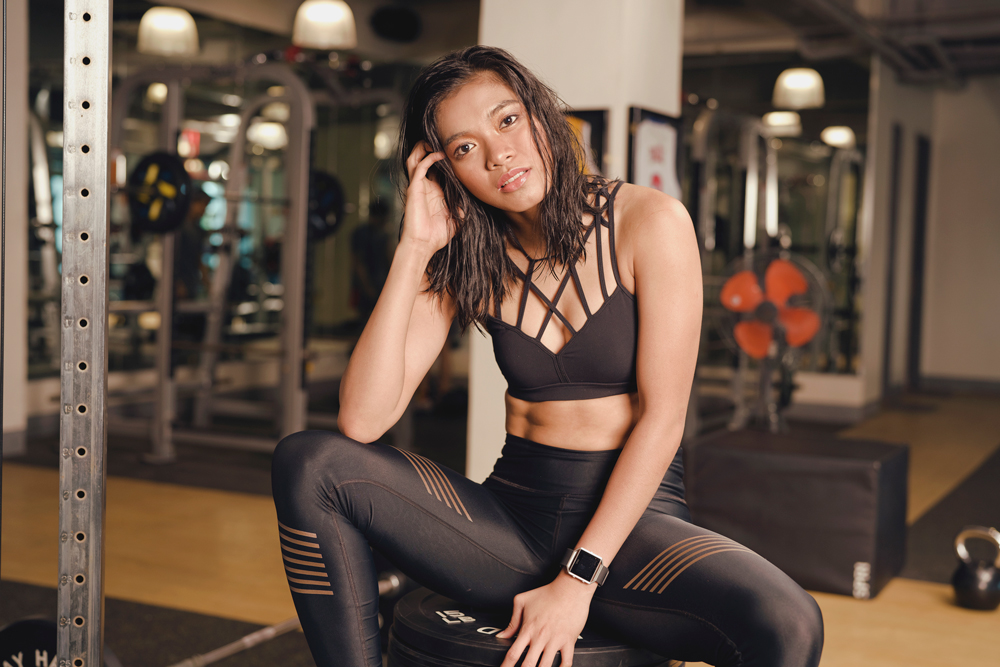 “I wasn’t born to be a volleyball player. I just worked really hard. Hard work will always, always beat talent.”

More than her talent and myriad of individual awards and special recognitions, what draws people towards Alyssa is how humbled and grounded she has been all throughout. I even asked her casually while she was getting ready for her first layout, “How do you do it? Do you think it’s nature or nurture?” To which she replied, “I wasn’t born to be a volleyball player. I just worked really hard. Hard work will always, always beat talent.”

Hearing those words stunned me, because here was one of the greatest athletes in Philippine volleyball history, thinking that she wasn’t born into the sport—that she simply worked hard to get to where she is today.

And I think it’s exactly that kind of attitude that has brought Alyssa Valdez to places. Her hard work and dedication, which you’ll see more of in our editorial video, is a testament to how, in Tim Notke’s words, hard work really does beat talent when talent doesn’t work hard.

In our first cover story of the phenom beauty, read up as our April 2018 #CalyxtaGirl, Alyssa Valdez, talks about growing up in Batangas and what childhood was like prior to entering the volleyball life. 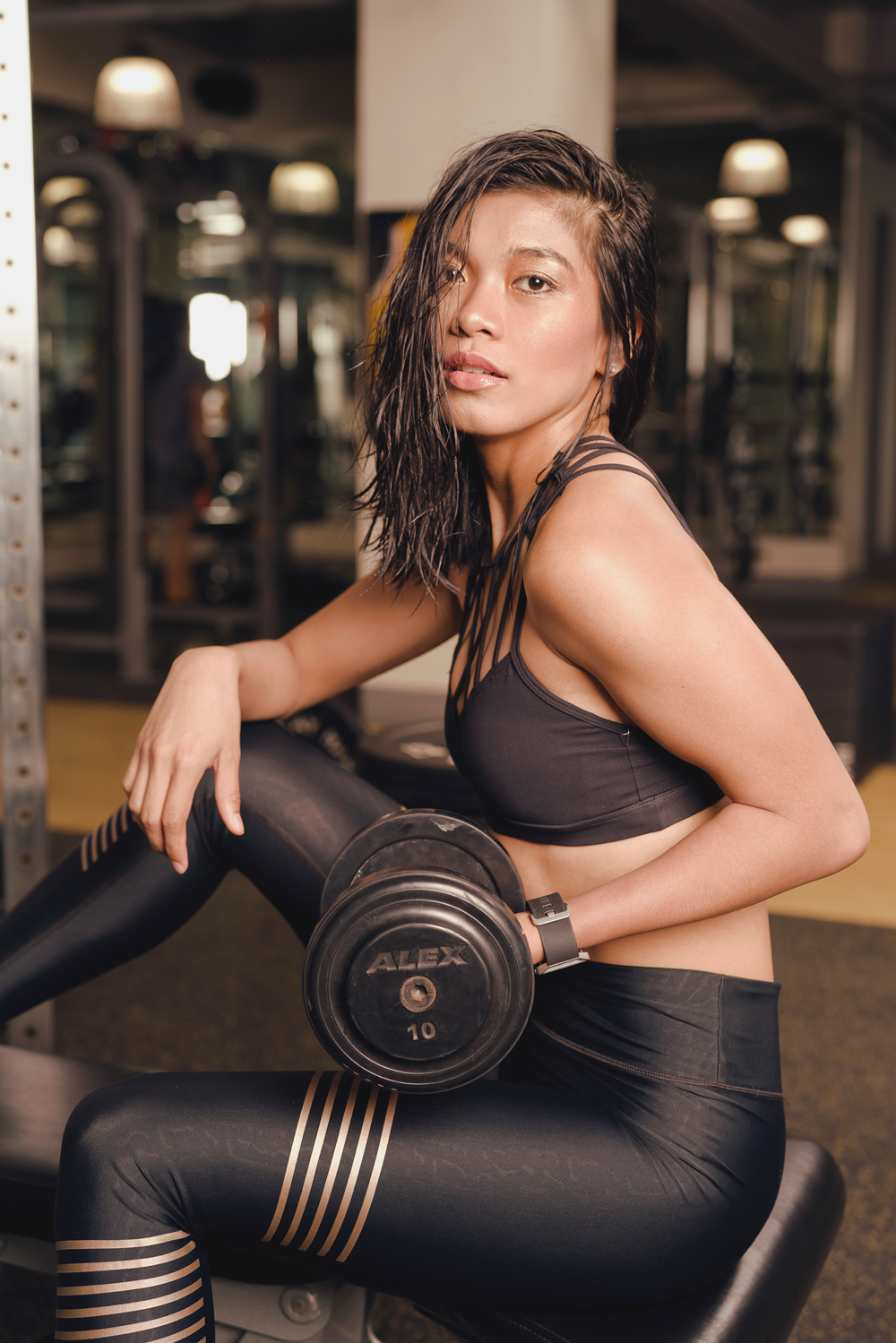 It was so simple. We really grew up in the province. It was just our house and our grandparents’ house, so my brothers were my only playmates. It was really simple—plain and simple. I can’t really describe it other than that.

What was the biggest adjustment for you when you moved to Manila?

Well, aside from being away from my parents and family (that was the worst for me!), I think I really adjusted to the fact that I had to interact with a lot of people. (laughs) I don’t know. I think because I usually just talk to my parents and to my brothers (because it was just our house and my grandparents’ back in Batangas). When I was in school there, I was also so quiet. I just observed people. But when I moved to Manila, I had to really go out of my comfort zone and talk to everyone because if not, I’ll be alone.

Were your parents volleyball players? Or just your brothers?

My brothers still play volleyball, but I think my mom used to play also when she was a kid.

Where did you get your athleticism from?

We don’t know actually. In our family, us siblings, we’re really into sports. But our parents, not as much. So it’s so weird. And among us cousins, it’s also just us siblings who are into sports. So weird. I think it’s because we had to make our own pastime or hobby when we were kids, so that’s what we ended up doing.

Did you also always want to become a volleyball player?

What did you want to be when you were younger?

I really want to be a teacher, because my mom is still a teacher. Until now actually. The only reason I started playing volleyball was because I really wanted to go with a girl group, because I’m always with my brothers. So whenever I’m in school, I get so excited to play because I know I’ll be talking to girls and doing girly things. It was really just that. I never imagined my life where up until college, I’d still be playing volleyball.

Which volleyball players did you look up to when you were starting out?

I’m really going to be honest. (laughs) I mentioned a while ago that I never imagined myself playing volleyball. I just played volleyball before because I just really wanted to play it. And I never had that one person in my mind who I idolized. When I moved to Manila, that was the only time I realized that volleyball was big. I thought it was just a sport, a pastime, or a hobby, and that’s it. But when I was in UST for high school (and that was the time that UST was super strong in volleyball), they’re the reason (especially the ones who played before me) I stuck to volleyball.

What made you decide to play for Ateneo?

(laughs) Well, definitely one of my dream schools was really Ateneo. No question. When you’re a kid, I think one of the universities you really want to try going for is really Ateneo. So maybe that’s one of the reasons that pushed me. But I’m also really attached to UST. I grew up there, I know a lot of people there, so moving to Ateneo would mean a new environment again. But my parents really helped me decide, because it was really a big turning point in my life. And if it’s college, it’s super different from deciding where to go to for high school, right? So there. A big part of my decision was the knowledge and wisdom of my parents, and all the people who supported me since high school. 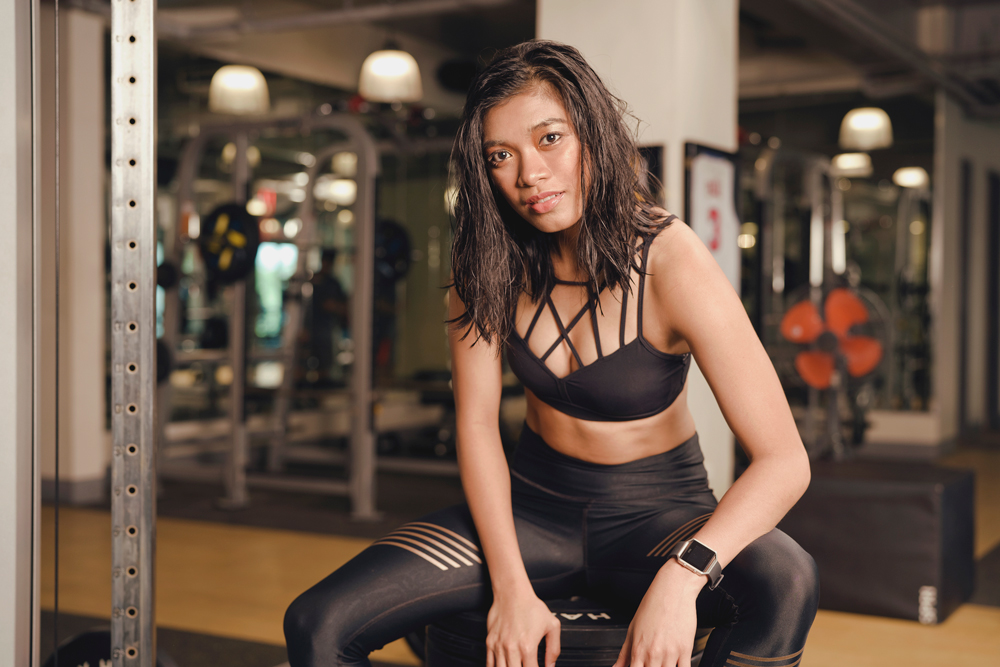 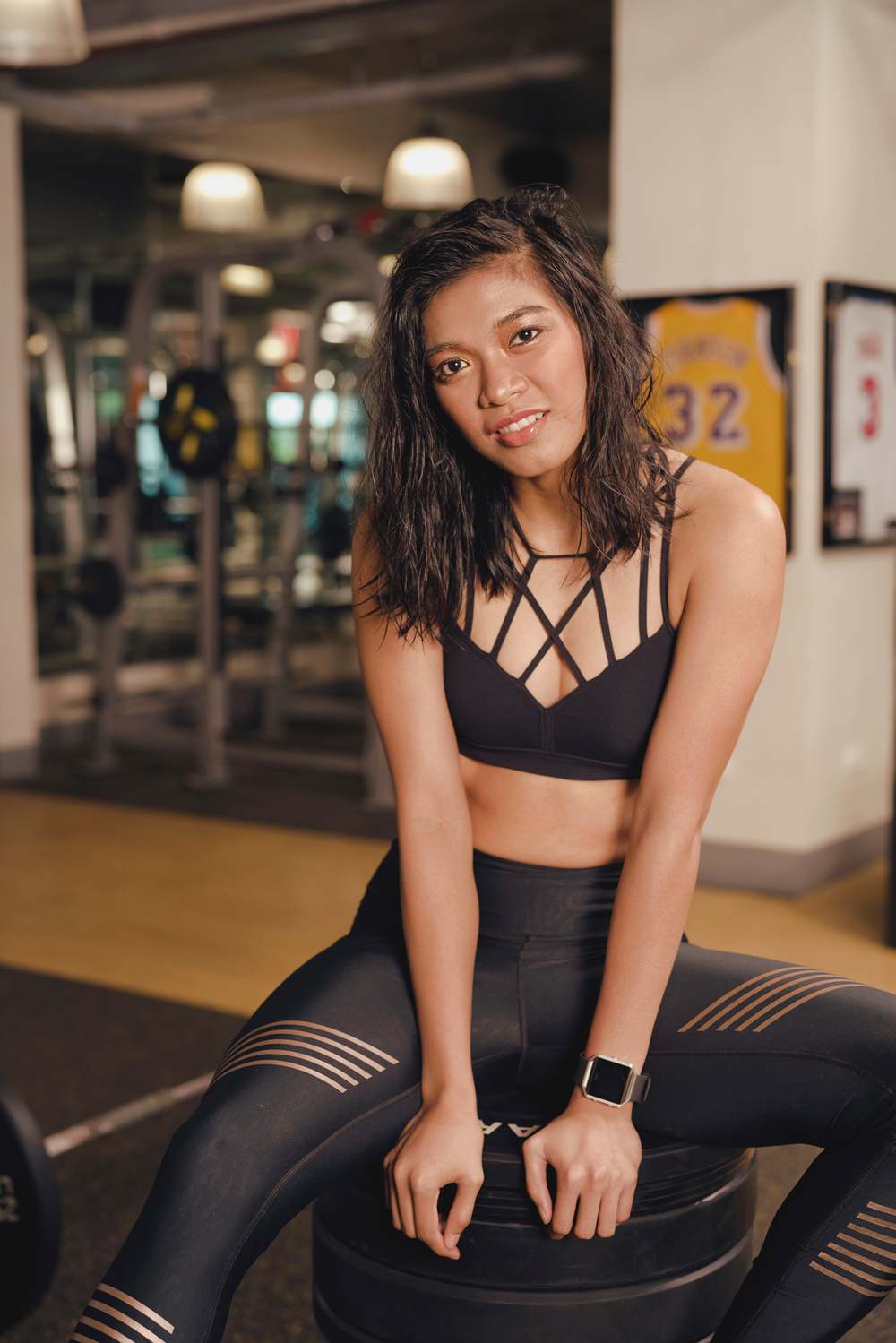 Funny story but I actually also came from Ateneo and I used to watch your games a lot, and what I always wondered was—what helped you stay grounded? What helps you stay humble and grounded?

I think it’s because I’m surrounded with good people. They really led me and guided me into what path I was supposed to take. But I think it’s really how UST molded me as a player, and how Ateneo put MAGIS and instilled being men and women for others. So it’s really that.

Did you ever expect the sport to grow as big as it is now?

Well, for us athletes before, we thought it was super big already, because that’s our sport! I mean—that’s the thing we look forward to every year. We train for a year for that season, but never thought of people more than our parents to watch. Way back, it was only our parents and our friends. But maybe people really saw the passion in the players, and that the sport is really interesting and fun to watch. So we’re happy! Of course, it’s also a big responsibility for all the players to bring their a-game, right? It’s a win-win situation for the sport and the players.

Does the fan base and attention get overwhelming?

It is overwhelming, because pretend in the provinces, we never thought that they’d be more aware. Whenever we go to the provinces, even if it’s my first time to hear of the province, it’s like, “Oh my god! They know volleyball!” Nakakatuwa.

What’s the most memorable thing a fan has ever done for you?

Well, definitely when they ask me to sign their cars—stuff life that. Or that they fly to where I am just to watch my games. And you know, I’m so honored because there are some who are very genuine and loyal. Even if they don’t say hi, you know them because they watch every single game. That’s when I get overwhelmed, because they really love not just the players, but also the sport.

Last question for week one—what’s a normal day like for you? What do you eat? What’s your routine like? How do you recover after training?

I work out in the morning, usually at 8 or 9AM. If I’m scheduled to do things like this, usually it’s in the middle of the day—shoots and other commitments. And then I’ll do therapy to recover and prepare for training from 7PM to 10PM. Actually, I make it a point to take a nap before training. As in that’s my rule. I should nap. And eat. (laughs)

Watch out for our next cover stories as Alyssa Valdez talks makeup and skin care, her favorite memories while studying in Ateneo, and what’s next for the face of Philippine volleyball. Follow us on Facebook, Twitter, and Instagram to stay updated!

Special Thanks to: The 3rd Fitness Lab

One thought on “Alyssa Valdez: The Phenom Beauty”