“Kiana’s such a bitch.” Kiana Valenciano drops her voice to barely a whisper at the mention of that last word. She’s talking about the kind of teasing she has to deal with from friends when it comes to her so-called RBF (Resting Bitch Face, in case you were wondering).“My natural face is just like–,” she mimes the best RBF she can muster.“And my brow is always up.” She prods at her right eyebrow, getting it to arch more. 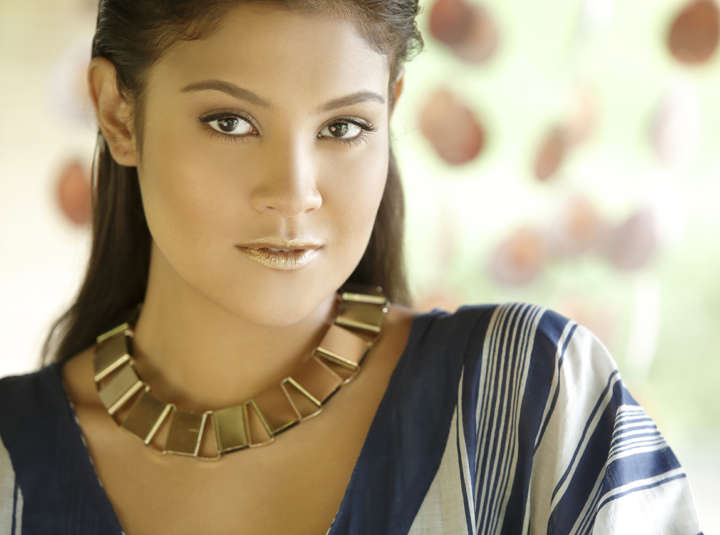 “Look at the photos! My right brow is always up. I don’t know why,” she chuckles. “I don’t like it when people find me intimidating,” she confesses. “It’s not who I am. It’s just the kilay!”

The Kiana that sits before me looks anything but bitchy. Considering a total stranger is asking her a bunch of questions, she’s relaxed and forthcoming — definitely not what her right eyebrow would like you to think. She’s even started making a conscious effort to talk to strangers more. “Let’s say we’re out and it’s a big group people…,” she begins. “Before, I’d wait for someone to introduce me. I mean, it’s still hard, but now I really push myself to just go, ‘By the way, my name’s Kiana, how do you know–’ yada yada yada,” she finishes.

It’s a resolve she made while living on her own abroad. “I went to London for three months and that was the best experience. I got to learn so much about myself.” One thing she realized was that she had difficulty speaking to people she didn’t know. “I worked on that, so now I’m completely unashamed of going up to someone and be like, ‘I love your shirt.’ Now when people come up to me, I enjoy it.”

Traveling, experiencing other cultures, and meeting new people has also taught Kiana to be more transparent. “When you meet people you don’t know and you have to start from scratch, you realize you have to be super authentic.” She notes that it can be difficult to maintain that balance between being open and knowing where to draw the line. Kiana grows thoughtful for a moment. “I think it’s just better to be nice,” she decides. “It’s so much better to be nice than to be guarded.”

Get lost to find yourself

True to her easygoing nature, one of Kiana’s favorite things about traveling is getting lost while wandering through the city. Her eyes brighten at the thought of adventure. Kiana shares one such moment from her trip to Madrid, “I’d just walk! At one point, I was freaking out already because I had no clue where I was.” But she just kept walking, pretending she was a local, going into little shops that caught her fancy along the way. “At that time I had never traveled by myself, so it was a little scary to just walk, but it was so much fun,” she professes.

These days, Kiana’s in Manila working on her EP. Pretty much everyone in the music industry has been waiting for it to happen, considering her dad Gary Valenciano is basically music royalty and her two brothers Paolo and Gab are already in the industry. Kiana laughs at how she’ll finally have something to tell people when they ask her yet again if she’s ever going to follow in her father’s footsteps.

The funny thing is, it was never a foregone conclusion for Kiana. “I guess people IN the industry were pressuring me,” she remarks. “But when I get home, my parents would just be, ‘Do what you want to do and we’ll support you.’”

Kiana didn’t rush going into music. “We’ve been working on trying to find my sound. It’s been maybe three years in the making,” she laughs softly. “I’m sure about it now.” Kiana describes her musical style as a mix of R&B and pop, the type of music you would listen to on the beach and just chill. And of course, very sentimental (or as one friend puts it: #feels).

When it comes to her creative process, Kiana works differently from those who write the words first and then set it to music after. “I prefer writing lyrics when there’s a melody already cause then I just fit the lyrics into that,” she explains. “So my words don’t really rhyme. It’s just like a conversation.”

For her first EP, Kiana has partnered up with her dad. “When I finally came up to him and explained what I wanted, he came up with a whole set of diff tracks. And then I heard one of them and I was like, ‘That’s it,’” she says as her pointer finger goes up. “Once I heard it, I had two lines in my head and it just went on from there.” Kiana beams as she remembers singing the chorus right then and there and her dad encouraging her to run with it. After that, it took her about two more weeks to write the rest of the lyrics and a little bit longer to nail the bridge.

“My first original is pretty sad and it’s about…” There’s a pause. “…personal experiences,” Kiana laughs a little self-consciously. It was a little weird recording with her dad at first since she wrote about a very emotional time in her life. “It was so funny because I was recording and I’d see my dad and he’d be (sighing),” she puts a hand over her heart for emphasis. “And I’m like, ‘Stop! Papa stop!’” She emotes for effect then laughs again.

Even though she’s focusing on her music, Kiana still does some designing for herself. She’s been sketching up a few things — tops that she can wear for her performances — possibly the beginning of her own personal brand that fuses her two passions.

No matter how busy the schedule, Kiana feeds her wanderlust with frequent trips to the beach. In fact, when she heard where the Calyxta cover shoot was going to be, she said yes in a heartbeat. “We’ve been going to so many different beaches this year just because of work— so lucky that work’s been out of town.” Ask her to name her favorite beach and she’ll give you a rundown of every beach she loves and why each one is special. After a while though, she settles on an answer. “I think Palawan is my favorite beach. When I’m in Palawan, it’s just me and my family.”

It’s an exciting time for Kiana. Her dreams are slowly turning into reality and taking her places. Keep your eyes and ears peeled for this sweet ingenue — the girl with all the #feels, the wind in her hair, and music in her heart. And when you do see her, maybe even strike up a conversation. That right eyebrow is just for show.

I have Marula Oil. I put it on before I sleep and when I wake up. But the thing is, I have white spots because I’m always at the beach. I leave the white spots out when I put the oil, then I put protopic for the white spots. In the morning, I put on my re-pigmenting stuff, stay under the sun, then wash it off, then Marula. It’s really just the Marula. And I use it as a primer. Before going out, I’ll put it on again. It sets well with my make-up.

When do you feel most beautiful?

It’s either when I’m fresh out of the shower or right after the gym. When I feel more fit and healthy.

What for you is a Calyxta cover girl?

Someone who’s comfortable in their own skin.