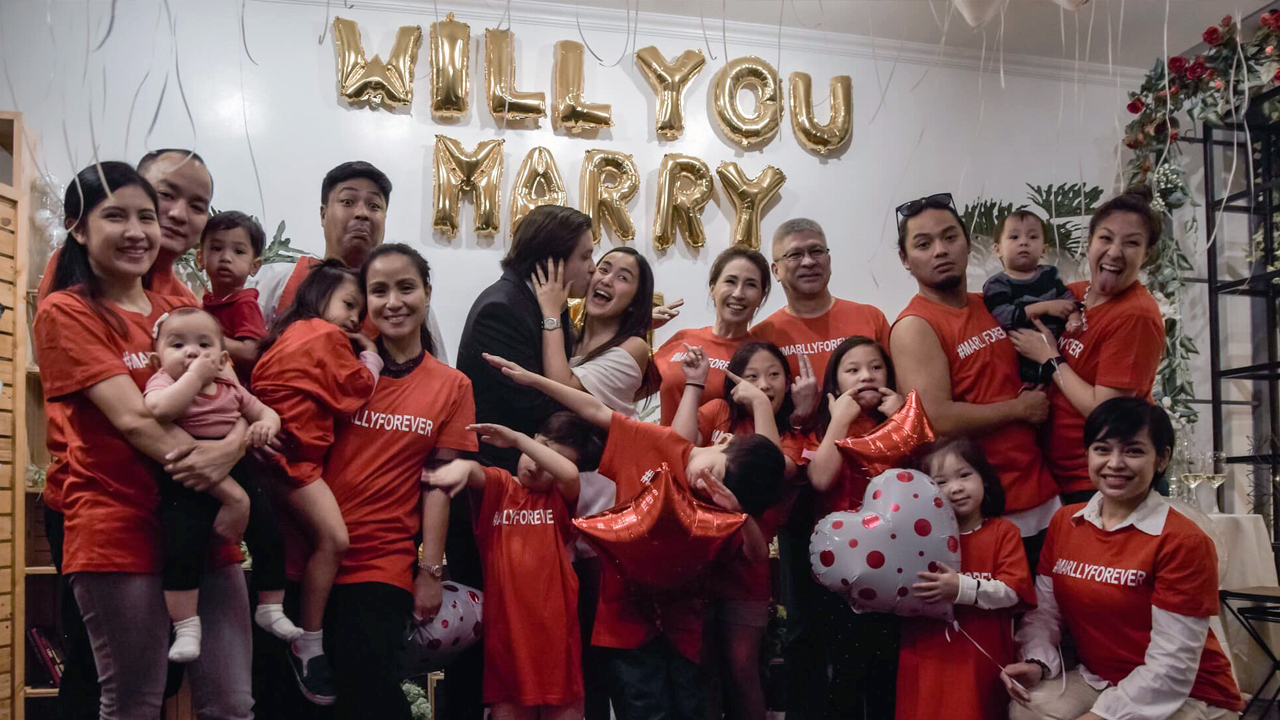 1. Can you give us a quick introduction of yourselves? What do you do?

My name is Allysiu Alvarez. I am 24 years old from Metro Manila. I was a former hotelier who handled social events, but I recently resigned because I wanted to focus on and explore different opportunities coming my way. I currently own a photo booth company with my fiancé and run a YouTube channel with makeup, lifestyle, and travel content. I also help in our family business in which we manufacture and supply fine jewelry.

2. When did you start dating? How did your love story start?

I first met Marc when I was 13 years old. This was 10 years ago back in 2009. He was the photographer in the dance class/studio I enrolled in. On the same day, I added him on Facebook! Though he was my Facebook friend, we did not have any communication at all until last 2013, when my mom started attending Zumba classes in the same dance studio we met in. My mom became friends with the titas there including his mom. Ever since then, everyone started teasing us with each other. Lol! Later on, I invited him to my debut, and surprisingly, he attended. On my actual 18th birthday, he sent me a message on Facebook. That’s when everything started. As of now, we are officially 5 years together!

3. What was the initial reaction after the proposal? Can you share the story with us?

My sister planned her wedding this September 2019, so in order to avoid sukob, I knew that our wedding would be in the year 2020. I was honestly expecting him to propose around October 2019 since January was a bit early, so I was so surprised. I had no idea!

On the day of the proposal, I was so busy with work since I was leaving for Hong Kong the next day, so I had to fix my endorsements. I used to stay in the office until 10:00 PM because I didn’t like to have pending work. He told my boss and colleagues about the proposal since I would have stayed in the office if they did not push me to “pack” for my vacation.

Marc and his family messaged in our Viber group that there will be a dinner for Marc’s niece’s birthday. So I finished work around 8:00 PM and drove in my black t-shirt and white culottes – just my usual chill comfortable outfit. So when I got there, Marc’s sister-in-law, Van, was in the restaurant waiting for me. She told me to change my outfit. So from there, I already had an idea that something was up. I did not want to assume, so I was just laughing. On the 2nd floor of Brewing Point, there was already a setup: flower petals, balloons, a flat screen TV, and a chair were all waiting for me. They made me watch an AVP – a compilation of our photos through the years.

I was already in tears watching the video. Then, Ate Van led me to a room. I started to cry again when I saw everyone – both of our families were complete (even the kids!), and most of my best friends were there.

He said his speech and asked the big question! It was the most perfect proposal I could have ever dreamed of. 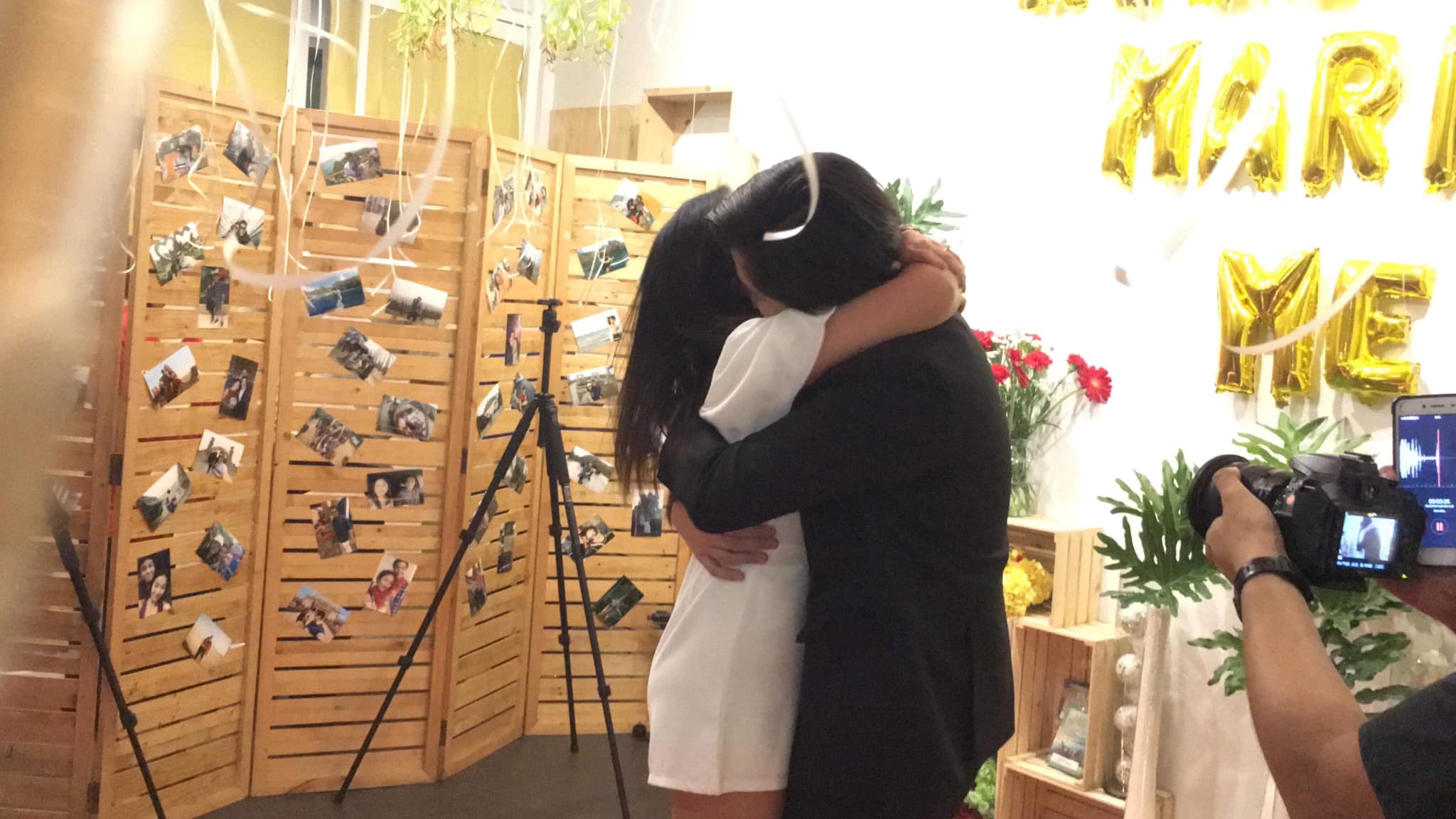 4. Who was the first person you shared your engagement with and why?

Since all of my family and most of my best friends were there already, I just sent out my engagement ring photo to my college best friends, my former colleagues, and of course, uploaded it on social media. 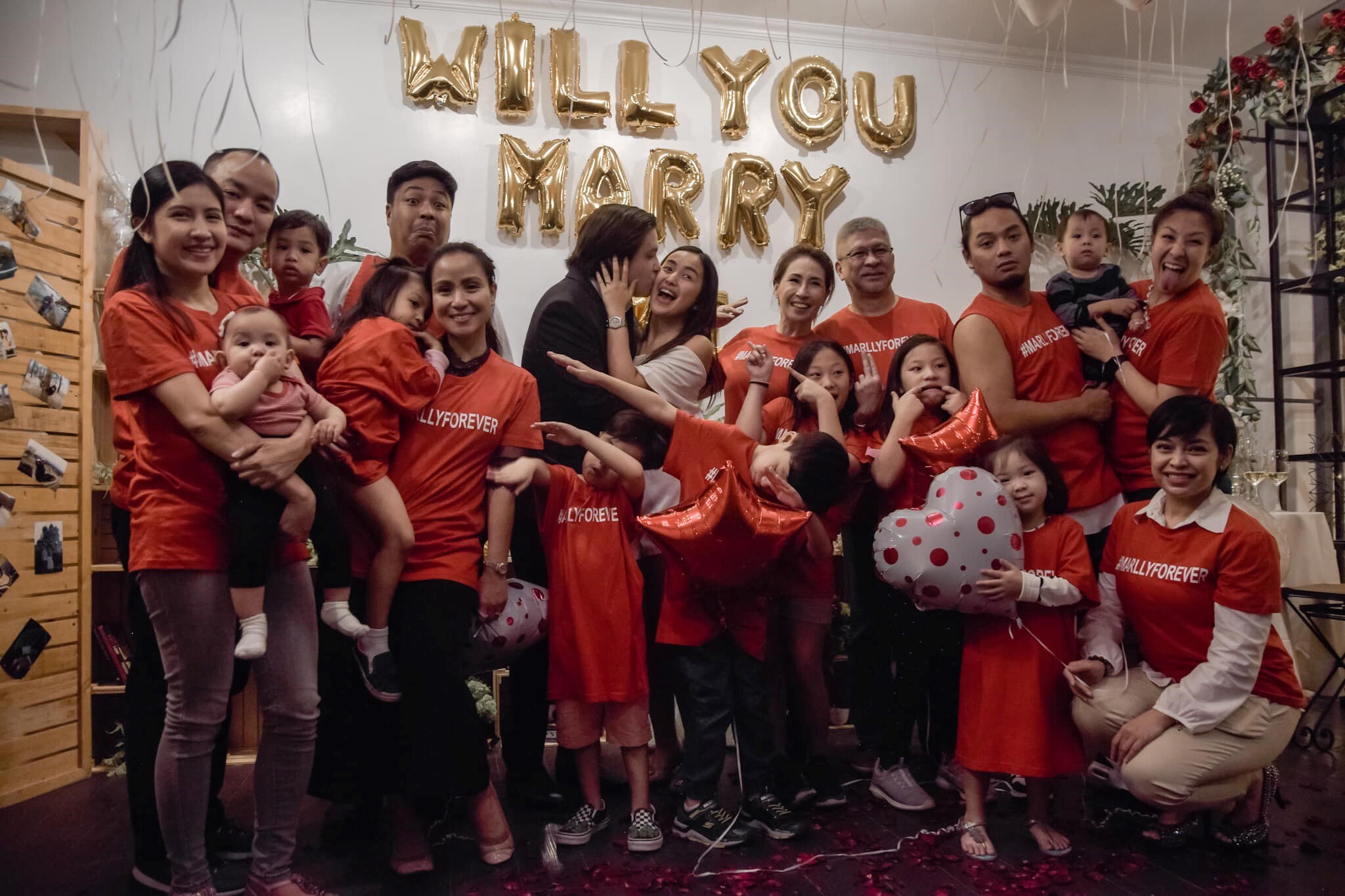 5. What was the first thing you thought about right after the engagement that’s related to the wedding?

The first thing I thought was the date and the venue. I had to inquire and make reservations right away!